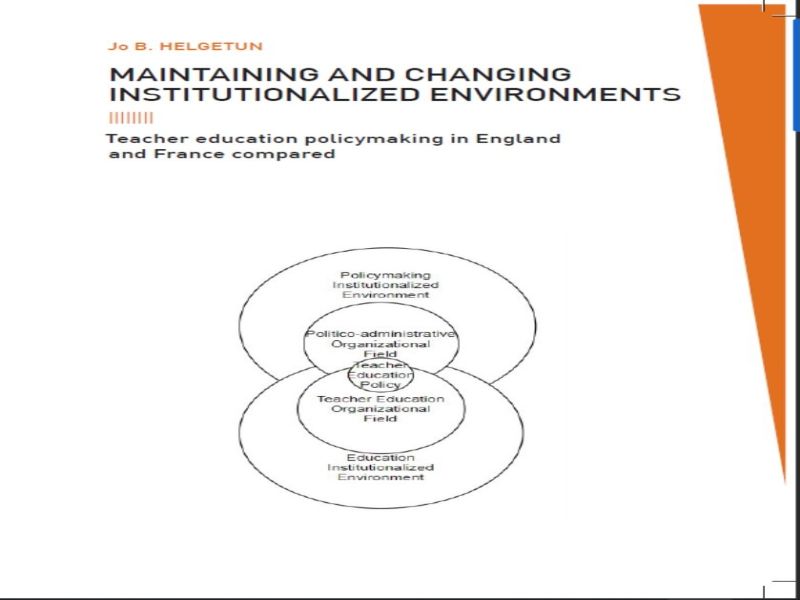 This dissertation aims to explain through “contrasting-comparison” the teacher education policymaking processes in the “educative-states” England and France. Through a comprehensive neoinstitutionalist conceptual framework the analysis tracks changes from 1980s to the present. In this period, teacher education has moved in England from a fractured academia centred system to a mosaic school-led system, and in France from a highly segmented form of initial teacher education provision with limited university involvement, towards increasing harmonization and structured university involvement in all facets of teacher education. The four main foci of the thesis are the characteristics of the institutionalized environments and organizational fields of the two cases, the increase in claims to possess “evidence of what works” by actors in (teacher) education, the socio-historical roots of the two cases current systems of teacher education and discursive practices (rationalisations), and how we can characterise change in their policy trajectories. The result of these cases‘ contrasting trajectories, and the subsequent different compositions of their organizational fields, is a much higher degree of academia based teacher educator access to influencing teacher education policymaking in France than in England. However, at present, in both cases, the central state is the dominant actor in teacher education, and all other actors must relate to its norms and structuring coercive force. Additionally, major change has happened in the teacher education fields in both cases, as the structures of provision has been altered. However, old tensions centred on the role of research and theory versus the role of practical experience remain central in both cases. The current practices, I argue, are in England rooted in a gradual imposition of the politicoadministrative field and institutionalized environment of the state on the teacher education field and environment due to cognitive blueprints centred on accountability through standards and measurement in (teacher) education that began in structural terms in 1984, and in discursive form in the 1960s. As a result of this, “evidence”, predominantly in the form of quantifiable data, has become the central tool of policymaking, while the dominant normative voice in teacher education has shifted from academia to high performing school leaders. The main theoretical insights granted by analysing these changes in England are that the transformative power of overlapping fields rest in the imposition of new norms, coercive tools, and cognitive-blueprints that may occur from one field to the other and the osmosis of ideas and ideations as the joining of fields bring different institutionalized environments into direct contact with each other. In France, the central characteristics of teacher education policymaking are the strong normative position of the state granted through path dependence from the values of the French revolution, the rationalised myth of state meritocracy and Jacobinism, and a close integration of state and education since the 19th century. The outcome of the French trajectory is an apparently static system, with some incremental changes that is mainly characterised by a singular event of drastic transformation, namely the creation of the IUFM in 1989. All subsequent policies have been predominantly aimed at implementing the vision of the IUFM. The changes brought new complications to the relation between teacher education and the university, however, the teacher education field is also lacking in a dominant voice as multiple actors all enjoy a right to be heard. Meanwhile, the state approach to policymaking remains centred on “experts-as-evidence” where professionals with a recognised authority to speak on education remain the primary sources of “what works”. A central theoretical insight here is how long-held beliefs can ossify and become structuring myths that are taken for granted by all major actors, rendering an environment static in its scope of possible ideations, but sufficient contestation centred on perceived shortfalls and clear solutions may create conditions for change that has transformative implications for multiple organizational fields.

Jo Helgetun’s doctoral thesis can be found in open access at DIAL at this link: